Mário Zambujal There are 3 books of this author 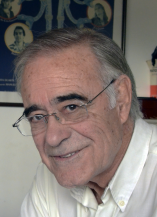 Mário Zambujal (Moura, 1936) made a name for himself as the writer of the narrative books that contributed to the vanguard of the New Portuguese Cinema, a recognition that lead him to win, in 1984, the formal distinction of the Infante D. Henrique Order, for his “enriching contributions to the Portuguese culture”. His peculiar visual and humoristic style in writing has been accompanying Zambujal's work throughout his long career as a journalist and scriptwriter, and for television and radio.

Zambujal's most well-known work, The Good Rascals Chronicles, was a major moment of public attention for the author, in particular after its adaptation to cinema, which made the book sell over 30 editions. In 2011 there was also a theatre adaptation of this work.

Besides the dozen books Zambujal has published, he also engaged in several playwriting collaborations for the traditional Portuguese Revista Theatre, and was a success case as a scriptwriter for television, having written sitcoms that stayed on air for many years.