Mário de Carvalho There are 8 books of this author 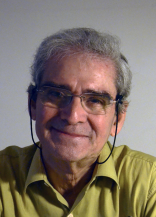 Mário de Carvalho (1944, Lisboa) is, most probably, the best living short story writer of the Portuguese language. A graduate in Law, the author had an intense political activity before dedicating his life to fiction writing, with his departure to exile after the students fights against the dictatorship regime being one of the most important episodes in his life, as well as the return to Portugal when the democratic Carnation Revolution of 1974 occurred.

Mário de Carvalho is currently published in 11 countries with works on different genres: novel, short story, children writing and playwriting (his plays have been put on stage in Portugal and abroad).

Owner of an impressive erudition and with a perfect command of the Portuguese language workings, he is the author of 25 books, nine of them having been multiple times awarded. His sophisticated irony, the universality of his themes and inventive abilities – sometimes reminding us of the fantastic atmospheres depicted by Jorge Luis Borges or inspired in the Portuguese literature classics – have resulted in translations of his books into the main market's languages: English, French, German, Italian, and others.

Amongst the most important prizes Mário de Carvalho won, it included: the Grand Prize of Short Story and Novel of the Portuguese Association of Authors, the Internazionalle Città di Cassino Prize (Italy), the Pegasus Prize for Literature, the Portuguese Pen Club Prize of Fiction, and the Vergílio Ferreira Prize for his lifetime written production. More recently, in 2014, he was distinguished with the Order of Saint James of the Sword for literary merit.

Mário de Carvalho coordinated post-graduate courses in playwriting, as well as several workshops in fiction writing, and was a university professor for several years.