Manuel António Pina There are 4 books of this author 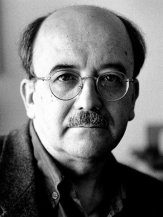 A poet for children. A rich imagination that addresses big themes with nonsense and word play. A writer who believes that having fun is the most serious thing in life. The interpreter of Portuguese sensibility in poetry and image.

Manuel António Pina (1943-2013, Sabugal) was one of the few Portuguese writers to win the most important distinction within the Portuguese speaking countries literature, the Camões Prize. He graduated in Law, was an influential journalist and Editor-in-Chief of a national newspaper, but it was as a poet and children's books writer that he won unprecedented prestige amongst the national literary scene.

Pina's works have been translated into Danish, French, Galician and English. During his career he collaborated with the British Film Institute; was the Portuguese translator and editor of fundamental authors like Pablo Neruda, T. S. Eliot and Paul Éluard; and won several prizes of the children's literature genre, namely: the Grand Gulbenkian Prize for Children and Youth Literature (1988), the Jury’s Mention of the Pier Paolo Vergerio European Prize (1988), and the Portuguese Centre of Theatre Prize for the Children and Youth (1988). In Portugal, he won in 2001 the Merit Golden Medal of the Porto Municipality. Pina was also part of the official authors' committee representing Portuguese literature at the Frankfurt Book Fair (1997), at the Paris Book Fair (2000) and the Genève Book Fair (2001).

Pina's children's literature production is characterized by a singular poetic sensibility that was strongly influenced by the British Nonsense literary style, in particular that of Lewis Carrol.

Pina was a regular collaborator in mediums like the television, for which he wrote scripts for children series; the theatre, having written more than twenty plays; or the education field, with his texts being part of manuals and anthologies in Portugal and Spain.