Leonor Xavier There are 2 books of this author 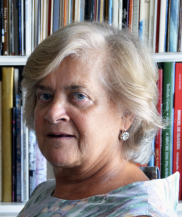 A key travel writer that reflects on the Portuguese influence in Brazil and the Middle East.

A journalist and novelist, Leonor Xavier (1943, Lisboa) started her writing career in Brazil, having published non-fiction books that reflect on the diaspora movement from Portugal to Brazil as well as in the socio-political realities in both countries. The acclamation by the specialized Brazilian critique brought the author to the Portuguese books' market in a later moment.

Leonor Xavier works were considered to improve and strengthen relations between Portugal and Brazil, for which she was awarded the Order of Merit of the Portuguese State.

Besides her books on Brazil and Portugal, Leonor Xavier is the biographer of some of the most relevant Portuguese culture figures and politicians; and produces essays, chronicles and fiction.

Some of her travels undertook around the world were put into books and supported by the Portuguese National Centre of Culture support.